You are here: Home / Archives for Week 5

The Cincinnati Bengals lost yet another heartbreaker Sunday afternoon to the Arizona Cardinals by a final score of 26-23. This loss pushes the Bengals to 0-5 for the season.

After the first half, the Bengals were only down 13-6 as neither teams’ offense could get anything going. Bengals quarterback Andy Dalton had only 4 completions on 10 attempts for 42 yards. Cardinals quarterback Kyler Murray had 12 completions on 18 attempts for 129 yards and a rushing touchdown. The Bengals added a short field goal in the third quarter to pull within 4 points at 13-9 but on their next possession while driving, they went for it on 4th and 1 and Andy Dalton was tackled short on a questionable quarterback run out of shot gun. Arizona gained momentum adding 10 points to go up 23-9 in the forth quarter. The Bengals did not quit though as late in the fourth quarter they went on a surprising 10 play, 79-yard drive that ended in an Auden Tate touchdown to cut the deficit to 23-16. The Bengals defense got a three and out and with under three minutes to go the Bengals had a chance to tie the game. They then went on a quick 4 play 81-yard drive which resulted in a 42-yard touchdown pass from Dalton to Tyler Boyd. Even so, the Cardinals and Kyler Murray were too much in the end. The Bengals had Nick Vigil on an island against David Johnson who made a nice catch on the sideline for 24 yards resulting in a game-winning field goal from kicker Zane Gonzalez.

Bengals quarterback Andy Dalton finished the game with 27 completions on 38 attempts for 262 yards, 2 touchdowns and no interceptions. Cardinals quarterback Kyler Murray finished with 20 completions on 32 attempts for 253 yards, no passing touchdowns and no interceptions in addition to 93 yards rushing on 10 attempts with a rushing touchdown. The Bengals rushing leader was Joe Mixon with 93 yards on 19 attempts. The Bengals leading receiver was Tyler Boyd with 123 yards on 10 receptions with 1 touchdown.

The Bengals and Cardinals played a clean game without a single turnover. The Bengals leading tacklers were Nick Vigil with 13 tackles (6 solo) and Shawn Williams with 12 tackles (10 solo). The Cardinals leading tacklers were Byron Murphy with 9 tackles (8 solo) and Jalen Thompson with 8 tackles (5 solo). The kickers played a big part in this game, Bengals kicker Randy Bullock was 3 for 3 on field goal attempts and Cardinals kicker Zane Gonzalez was 4 for 5.

Next for the Bengals is a divisional game against the Baltimore Ravens on Sunday, October 13th at 1:00pm EST.

The Cincinnati Bengals are headed back home for a Week 5 matchup against the Arizona Cardinals on Sunday, October 6th at 1:00 pm EST.

The Bengals are 0-4 after getting blown out on the road by the Pittsburgh Steelers 27-3. Bengals quarterback Andy Dalton had 21 completions out of 37 attempts for 171 yards and 1 interception while getting sacked a career-high 8 times. Running back Joe Mixon had 62 yards on 15 attempts and the leading receiver was Auden Tate who had 50 yards on 4 receptions. The Bengals defense played relatively well in the first half, only allowing 10 points and even forced a fumble. However, in the second half they looked overwhelmed and tired, giving up 17 points.

The Cardinals are also coming into this game winless at 0-3-1 record after losing at home to the Seattle Seahawks 27-10. Quarterback Kyler Murray had 22 completions on 32 attempts for 241 yards with 1 interception. Running back David Johnson had only 40 yards on 11 attempts but was the Cardinals’ leading receiver with 99 yards on 8 receptions. Seahawks tight end Will Dissly fumbled once and quarterback Russel Wilson twice, yet the Cardinals did not recover any of those fumbles.

If the Bengals want to get head coach Zac Taylor his first win, they have to be able to set the tone upfront. The Bengals offensive line had the worst performance of any team in Pro Football Focus history last week. Joe Mixon and Giovani Bernard need to be more involved now that wide receiver John Ross has been placed on injured reserve. Mixon and Bernard should see the ball more in both the passing and running games.

If the Cardinals want to get head coach Kliff Kingsbury his first win, Kyler Murray has to stay clean and not turn the ball over. The Cardinals will have to take advantage of the Bengals slow linebackers, run the ball to the outside with David Johnson or do more read options with Kyler Murray. If utilize their tight ends, it will cause matchup advantages for the Cardinals since the Bengals linebackers continue to struggle in coverage. The defense will need to be opportunistic and force turnovers whenever they can against the struggling Bengals offense. 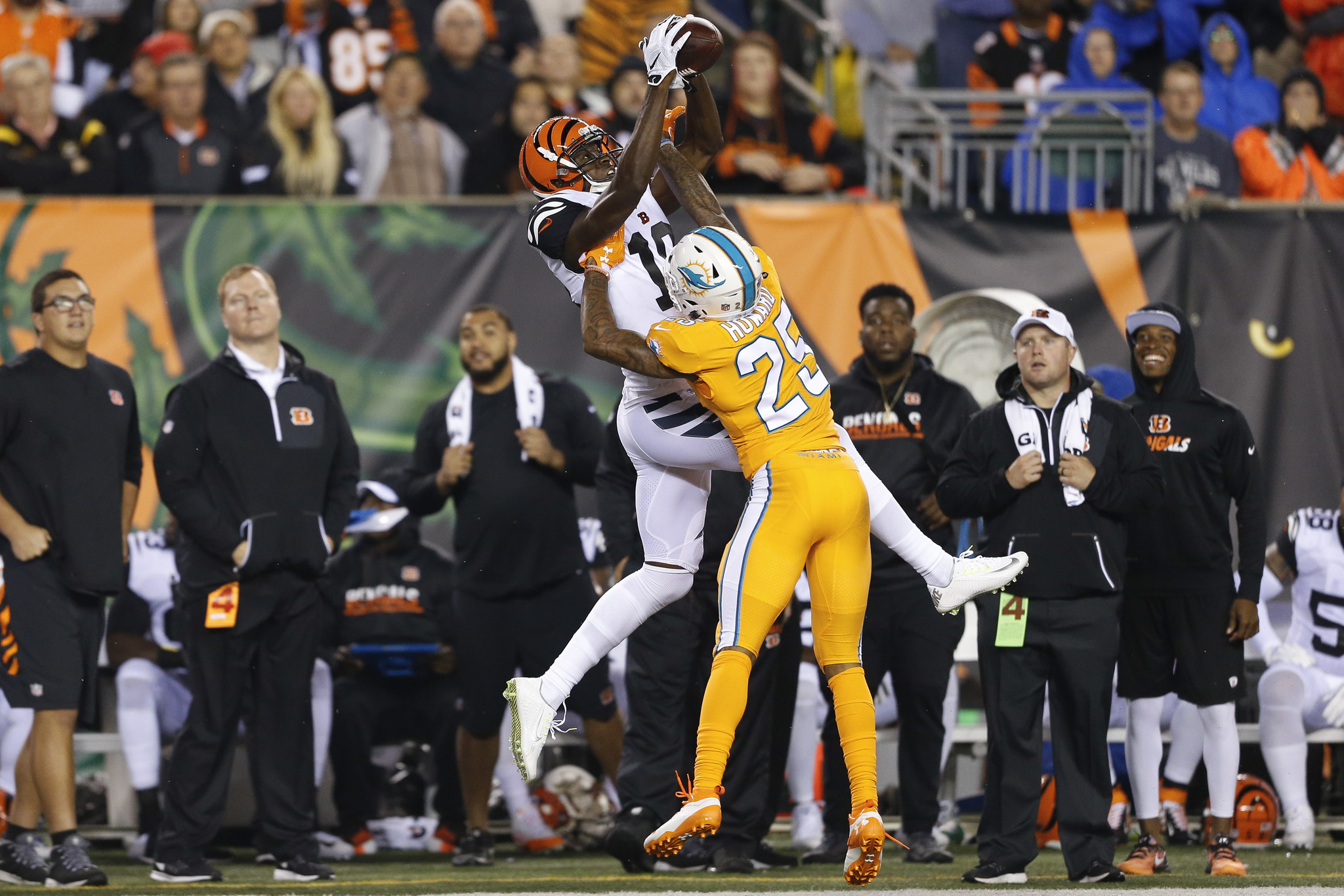 What a game, what a game it was. The Bengals managed to leave Atlanta with a win last week bringing them to 3-1 on the season. 3-1 sounds even better when you take into account that three of those games were on the road, no Vontaze Burfict in any of them, and no Joe Mixon or Billy Price in two of them. The Bengals did something Bengals fans don’t often see and that is a come from behind win on the road. Down late in the game Andy Dalton led the Bengals down the field to score with seconds remaining. It was a Bengals team that finished strong and did not falter like we have often seen them do. It looked like a different Bengals team we are not used to seeing.

For anyone that reads this weekly you will know I had a wedding to attend last weekend and was worried about making it home in time to watch the game. Fear no more, I managed to pull in the drive at one o’clock and watched the whole game. Enough with week 4, lets move on. I’m going to be honest, Sunday feels like a trap game. I have heard several others mention this as well, fresh off of a big win, with Pittsburgh next week, it feels like a trap game. I’m hoping the Bengals have not already looked past a sneaky good Miami team that sits at 3-1.

A.J. Green vs. Xavien Howard – Last time Green played the Dolphins he picked them apart to the tune of 10 catches for 173 yards and a touchdown. An absolutely dominate performance, most of it coming against then rookie Xavien Howard. Howard was “mossed” in this game by Green and looked silly. That was two years ago, now Howard is playing like a top corner in the league, in fact he shut down Amari Cooper just weeks ago. Howard is a good corner, I think he causes some fits early on but I think Green gets going in the second half of the game. I also predict Green to score his 6th touchdown on the year this week.

Vontaze vs. The New NFL Rules – The much anticipated return of one of the most controversial players in the league. You either love him or hate him. Despite his famous hit in the playoffs, I love Tez. I think he is exactly what our defense has been missing on third downs. With Tez back, I think he helps our defense get more third down stops and get the defense off the field. That is of course if he stays on the field. Tez is no stranger to suspensions, and with new rules in place it could be hard for a targeted Tez to stay on the field. Burfict will have to play smart to avoid letting his teammates down with another suspension.

Bengals Pass Rush vs. An Underrated Dolphins Line – The Dolphins passing weapons are not to be taken lightly. They have some talent at the receiver position that could test our secondary. This is why the Bengals must put pressure on Tannehill and not give him time to find the open guy down the field. After a huge preseason this defensive line has been quieter than expected. Geno and Dunlap are still their usual selves but guys like Carl Lawson, Andrew Billings, and Jordan Willis have not made the impact we might have thought they would. This is the week they need to bring it and show how dominate they can be on the line.

My Prediction: I was wrong last week, despite thinking the Bengals would win, since I figured they would split the Atlanta and Carolina game, I picked them to lose. I did not give them the benefit of the doubt and trust this new confidence they have. I am also not doubting them this week, I think Marvin Lewis will have them ready and not let them fall victim to a trap game. The Bengals are very talented and playing good football. While it looks like John Ross and Gio Bernard may miss this game, we will see Joe Mixon and Vontaze Burfict back. Arguably the most passionate players on each side of the ball should be the spark the Bengals need to keep rolling this week at home.

My Bengals Predictions on the year: 2-2

Be sure to follow me on twitter @Pierson242FF, and be sure to tweet me if you are at the game as I will be in attendance on Sunday at Paul Brown Stadium.

The Bengals got a big win today and defeated the New England Patriots 13-6 at Paul Brown Stadium. The Bengals defense held Tom Brady to under 200 yards passing and put an end to his streak of 52 straight games with a touchdown pass. Read more by clicking here.

Welp, it’s Week 5 already and to put it bluntly, last week in Cleveland was super ugly for the Bengals offense. Offensively they looked absolutely anemic as they could only muster 6 points against a good Cleveland defense. Whether it be too many penalties, too many turnovers, a quarterback struggling to find consistency, or questionable play calling, the Bengals offense must improve as they attempt to right the ship and make it to the post season for a third straight season. There is just too much talent and depth on this team for them not to improve on last seasons 10-6 record and one and done post season outcome.

The weather forecast in Cincinnati tomorrow calls for thunderstorms and an 80% chance of rain. With that being said Bengals fans hope they will see a heavy dose of runs from Giovani Bernard and former Patriot Benjarvus Green-Ellis and hopefully a consistent run game will open up the middle of the field for high percentage completions from Andy Dalton to his receivers and tight ends. The phrase “a good running game is a quarterbacks best friend” has definitely been true thus far when it comes to the quality of play we see from Andy Dalton.

So far this season it appears that the Bengals have tended to play up to the more hyped up opponent and play down a bit against teams where they are supposed to win based on media perception heading into the game. Regardless, they will need to raise their level of effort and execution and clean up many of the mistakes that have plagued them during the first 4 games of the season thus far.