You are here: Home / Archives for Vontaze Burfict

The Bengals injury report came out Friday and as expected A.J. Green has been ruled out, despite Marvin Lewis hinting at him playing Sunday. Green along with five other Bengals have all been ruled out for Sundays game against the Ravens.

Vontaze Burfict, Dre Kirkpatrick, and John Ross are all listed as questionable. Already down A.J. Green, if John Ross is in the lineup it would be huge. He had a good outing versus the Saints and could look to further build off of that performance Sunday against the Ravens.

Also good news for Bengals fans, Darqueze Dennard and Joe Mixon did not make the injury report which means both should be all systems go come Sunday. This will be Dennard’s first game back since suffering an injury against the Steelers.

Injury report correction from the #Bengals: A.J. Green listed as doubtful instead of out.

Welp, we’re halfway through the 2018 season – and for Cincy fans, things ain’t looking too bad.

The team stands at 5-3, including a win against AFC North foe Baltimore. That’s the best start since going 8-0 in 2015 (which feels like a helluva lot longer than three years ago). They are 3-0 against the teams with whom they are in wild-card contention (Ravens, Dolphins and Colts). Five remaining games are against teams with losing records.

If the receiving corps can hold together until A.J. Green gets back from a foot injury, and the offensive line continues to gel, and Vontaze Burfict quits playing like he’s trying out for the Cleveland Browns, a postseason trip could very well be in the cards.

By the way … some of those players we just mentioned, they deserve mid-season mentions for their accomplishments. Or lack thereof.

MVP – Andy Dalton: Halfway through the year, Dalton has thrown for 2,102 yards and 17 touchdowns. The latter of those is tied for eighth in the NFL with Tom Brady and Ryan Fitzpatrick. We’re not saying we’d take him over Tom Brady at this point … wait, yes we are.

Surprise player – Trey Hopkins. Offensive guard Trey Hopkins had to show hustle to move up from the practice squad in late 2016. He had to show it even more to earn 12 starts in 2017. Through the first half of this year, he has shown us – and all Cincinnati Bengals fans – that he’s the real deal. Didn’t see that coming.

Rookie MVP – Jessie Bates. Now this is the way to make a first impression. Rookie free safety JB has racked up 60 tackles this year, defended four passes, picked off three others, and scored a touchdown. The last time a Bates was this scary, he was stabbing Janet Leigh in the shower (kids, ask your parents).

Most improved player – Tyler Boyd. Boyd has produced three 100-yard games this year and almost got a fourth against the Ravens in Week Two. His five TDs this year are already more than his first two seasons combined. With 620 receiving yards so far, Boyd is easily on pace to break the 1,000-yard mark in 2018. Now if we can only get John Ross to do that …

Most disappointed in – Vontaze Burfict. Vontaze browned the bed by getting suspended for the first four games of the year for using PEDs. He’s only tallied 17 tackles so far and the Cincinnati Bengals’ defense has fed off that, which puts them on par with the worst Ds in the league. They are 30th in total yards allowed, 25th in rushing yards allowed, and 19th in sacks. Granted, they are tied for sixth with 10 interceptions, so we’ll throw ’em a bone there.

His latest run-in, 2 separate hits in the last Pittsburgh Steelers game, cost him $112,000. Considering the opponent, it was almost worth it.

His career list of offenses, which reads like that list from season 2 of The Simpsons where Marge was documenting the ways Itchy and Scratchy were slaughtering each other, includes unsportsmanlike penalties, late hits, spearing, stepping on LeGarrette Blount, and the incident that makes us hope Ryan Taylor was wearing his jock.

So, if you’ve ever wondered how much you could buy with the total of VB’s bad-boy money, the answer is … a lot.

What You Could Buy With Vontaze Burfict’s Fine Money

And FYI, these numbers don’t reflect the $4+ million in forfeited pay that Burfict has been docked because of his suspensions. Don’t get us started. 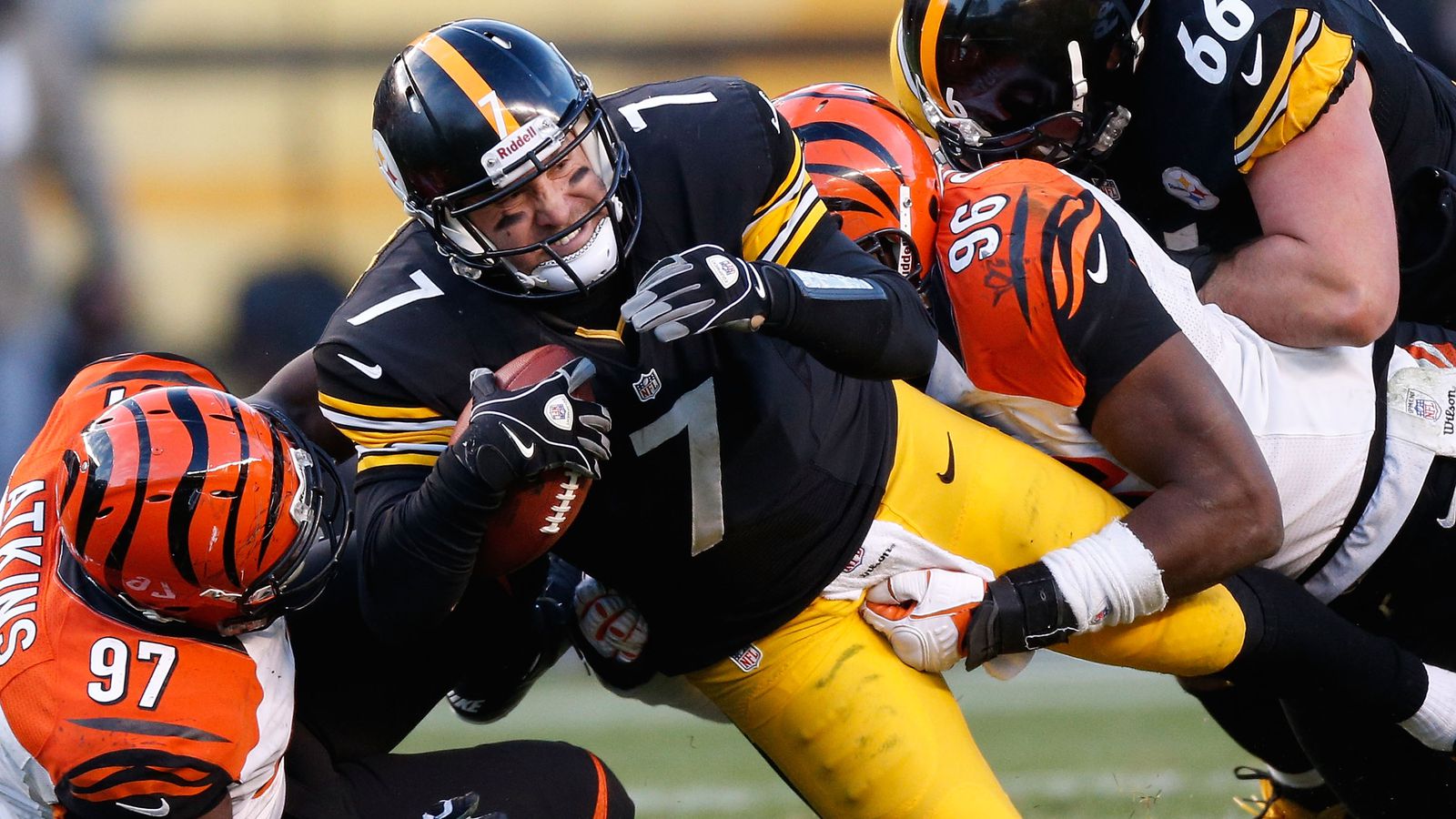 Its Pittsburgh week, the Bengals survived the trap game and the weekend we wait for twice a year is now upon us. In last Sunday’s game against the Dolphins we saw the Bengals offense struggle for the first time this year. On the flip side we saw the defense step up and win us the game, coming away with two defensive scores and three takeaways. While there is much to improve on with special teams, the Bengals defense was dominate. They held the Dolphins offense to just 10 points. It was a very promising showing heading into this week.

This week will be my first time not attending a home game for the Bengals this year (I was also at Indianapolis which is basically a home game). I debated long and hard about it and decided to save some money and stay home and watch. The Steelers games can get rough with the opposing fans. It seemed like it would be more comfortable to watch in the safety of my own home.

William Jackson III vs. Antonio Brown – Last year Jackson was able to shut Brown down, dominating him through two games. This year Jackson has taken a small step back in terms of how “shutdown” he has been. However, last week both Jackson and Dre Kirkpatrick did not allow the Dolphins to complete anything down field. The Bengals corners may have found their groove at the perfect time. William Jackson will once again look to shut down Brown and frustrate this offense.

The Bengals Defensive Line vs. Big Ben – Earlier in the week, Carlos Dunlap was on record calling Big Ben a “300 pound quarterback”. Ben was also in the news this week talking about how dirty this matchup can be. It will be very interesting to see how the Bengals defensive line handles taking down a big quarterback like Ben with the new NFL rules. Ben is very good at avoiding sacks, and the new rules may make this ever harder to do.

Vontaze Burfict vs. JuJu Smith-Schuster – I am sure I do not need to remind anyone why this is a matchup to watch. JuJu laid a hit on Burfict last year that ended his season. It will be very interesting to see what happens when these two meet on the field and what it sparks between teammates on the field as well. This matchup and how both players handle it, could affect the outcome of this game.

My Prediction: All games are must wins, but this one is particularly important. The Bengals will have a tough time winning the North if they cannot beat Pittsburgh at least once. They will be at home with the crowd behind them, making this the easier of the two Steelers games. The Steelers have been full of drama this year off the field while the Bengals have kept quiet and gone to work. I think this is a different Bengals team than in years passed. I believe they have the talent and mindset to go into this game and play smart and escape with a win. My prediction is a late field goal by Bullock to put the Bengals up for the win.

My Bengals Predictions on the year: 3-2

The Metal People are coming to town. Even better, they’ve looked as soft as melting gold so far this year. Those from the “pit” are ripe for the picking.

Notice how we haven’t named them yet? That’s because, with some teams, you just dislike them so much that you want to say their name less than Voldemort. And there’s a reason for that hatred. In fact, there are several.

Cincinnati and the pit town have had more than their fair share of run-ins over the last few years. That has mushroomed into a pretty fierce rivalry – one that would give Da Bears!-Packers historic rivalry a run for its money.

Here are five moments/games that have really brought this thing to a head. And made us want to rip someone’s head off.

5 Big Moments in the Cincinnati Bengals Rivalry with “Them”

5. Time to Shine
Some might say this was more shallow than an episode of Real Housewives of Beverly Hills, but it was still fun. Wide receiver T.J. Houshmandzadeh had a great game in a 38-31 victory at Heinz field in 2005. To top it off, he used a Terrible Towel to shine his cleats in the tunnel. We can think of only one better use for the Terrible Towel. Hint: It wouldn’t be the shoes that you wipe …

4. Refereegate
The sting of this one is still fresh. It’s December 2017 and the Cincinnati Bengals are still hoping for a playoff bid. But the black and gold team stopped them cold, with some help from the black-and-white striped team. The Bengals were flagged 13 times for 173 yards (a team record). Many of those were the result of poor officiating. The worst was a BS holding call against Giovani Bernard in the second half that wiped out an Andy Dalton touchdown pass. It was such a phantom call that you half-expected to see an opera along with it. The TD – and the momentum – was officially lost. Along with a 17-point lead, the game, and the postseason.

3. Taking a Knee
The first playoff meeting between the two teams was in 2005. The stakes were high, the tension higher. Said tension reached a fever pitch when Bengals’ QB Carson Palmer was drilled on the second offensive play (in what many people thought was a late, dirty hit) and left the game with a knee injury. Cincy still managed to take a 17-7 lead, but the bottom fell out after that. The Other Team scored 24 straight and won 31-17, paving their way to a Super Bowl title.

2. You’re Late … Again and Again and Again. If you thought one late hit was a doozie, how about a second half full of them? That’s what we witnessed in the 2015 Wild Card Playoff game. Things seemed reasonably calm in the first half. Then the rain started falling … and the bodies. Assistant coach Mike Munchak pulled Reggie Nelson’s hair. Giovani Bernard was on the receiving end of a Ryan Shazier helmet-to-helmet tackle. Vontaze Burfict and Pacman Jones donated 30 yards in penalties to the Make-a-Field-Goal foundation. Even Ben Roth ….Roethles …. Roethlis … Big Ben was pelted with garbage as he was carted off the field after being sacked by Burfict. Where were the WWE superstars to make it a complete circus?

1. You Want Somma This? Well sorry, it’s ours! The 2009 Iron Workers football team allllmost qualified for the playoffs at 9-7. How sweet was it then, that two of those losses were to the eventual AFC North champion Cincinnati Bengals? Because, ya know, without those two losses, Pitt would have made the postseason. Claiming a playoff spot with one hand and shoving your heated rival away from it with the other hand? Ummmm, yes please!