You are here: Home / Archives for Ravens

This week the Bengals face another tough task. That is going into M&T Bank Stadium and facing a divisional rival, the Baltimore Ravens. Like the Bengals, the Ravens are also in the wild card playoff hunt and a win against the Bengals would give the Ravens matching records with Cincy. In order for the Bengals to keep their playoff hopes alive, they can only afford to lose two games max the rest of the year. And with games still left against the Chargers and Steelers, they cannot afford to lose this week. They will have to be sharp against a very good Baltimore defense.

Tyler Boyd vs. WR1 Coverage – I listed it last week and I will list it again this week. Marvin Lewis isn’t closing the door on A.J. Green playing this Sunday, but we all know that is a total smoke screen. We will not see A.J. Green Sunday, and that is that. Tyler Boyd MUST continue his breakout season against the Ravens top corners, Marlon Humphrey and Brandon Carr. The Ravens defensive backs have already publicly stated their plan to keep more eyes on Boyd. This could be his toughest game of the year.

Andy Dalton vs. The Ravens Secondary- The Baltimore Ravens secondary is good. They are averaging the 3rd fewest passing yard per game this year with an average of just 205 yards allowed through the air. Andy Dalton will have his hands full this weekend, especially with no A.J. Green. The last time the Bengals faced the Ravens Andy Dalton carved them up for 265 yards and 4 touchdowns, but that was with a healthy A.J. Green. Good Andy will have to be out in full force in order to get anything going against this stingy pass defense.

The Bengals Defense vs. A Backup Quarterback- The closer and closer we get to Sunday it becomes more and more evident that Joe Flacco isn’t starting. However, that doesn’t mean we are any closer to knowing who will start. The Ravens are keeping quiet, not telling us if Lamar Jackson or Robert Griffin III will get the start on Sunday. It is looking like it will be Griffen. Regardless of who gets the start the Bengals must take advantage of a backup getting the start.

My Prediction:The Bengals are one game removed from a blowout loss and have recorded three straight games where they given up 500+ yards on defense. I think the combination of a backup quarterback starting for the Ravens and Marvin Lewis taking over the defense, leads to the Bengals defense getting a little more on track. While the Bengals linebackers are all banged up, the rest of the defense should be able to step up. The Bengals seem to always have the Ravens number. It will take everything they have but I believe the Bengals escape with a win.

My Bengals Predictions on the year: 6-3 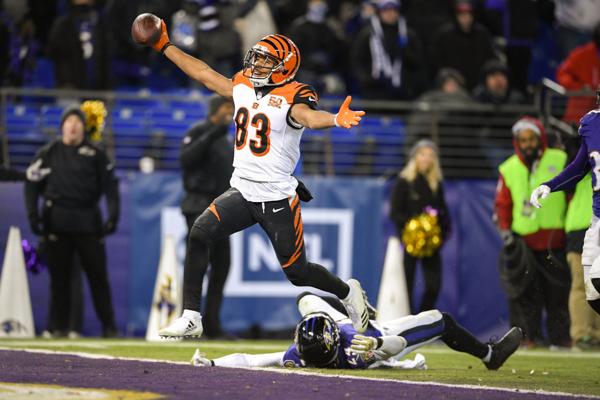 Wow, was it nice to have football back, not just for the Bengals but for the NFL as a whole. It was of course especially good for Bengals fans as they not only won but they also saw the Steelers not win. They of course tied with the Browns which ties the Bengals for first place in the AFC North and a chance to take it over against the team they are tied with, the Baltimore Ravens.

Before we move on to week 2, there’s a few things I want to mention from what I saw at the game Sunday. First things first, Joe Mixon is good at football. After a disappointing rookie year, Joe Mixon looks as good as advertised, tallying nearly 150 total yards from scrimmage and a touchdown. Mixon was the difference maker in Sunday’s game. Next, is the offensive line, while they were not perfect they were MUCH better than last year. Mixon saw more success running, and Dalton got more time to throw. It is still early in the year and they should continue to develop. A.J. Green had a case of the fumbles on Sunday, fumbling twice. It was not good to see from the veteran but not something to worry about. Green has been in the game long enough, he will fix it and move on. Overall it was a great performance for the Bengals who started slow, going into halftime down 10-16. However, in the second half they clicked and played like a much better team, outscoring the Colts 24-7.

Now onto week 2, where the Bengals host the Ravens on Thursday Night Football. The Ravens are fresh off of a blowout win against the Bills, and as I mentioned, both teams will be playing for the AFC North division lead.

Joe Mixon vs. Baltimore’s front seven – Baltimore held the Bills to just 83 yards rushing as a team, with no one exceeding 31 yards total. They played well, however the Bills offensive line is significantly worse than the Bengals. The Bengals were able to rush for over 100 yards as a team, with Mixon going for 95 himself. Mixon was a difference maker in the game Sunday, without him they don’t win. Mixon will be a huge piece if the Bengals want to win Thursday night. They need to get him going early and often so he can find his rhythm and repeat his week 1 performance.

John Ross vs. Brandon Carr – Carr gets his second start due to the suspension of Jimmy Smith. Carr had an exceptional week one allowing two catches for 24 yards on seven targets. However, the competition Carr faced last week is not quit what he will get in week 2. Carr should be lined up against John Ross most the game and it will be interesting to see what Ross can do. With Marlon Humphrey and either Eric Weddle or Tony Jefferson on Green. Ross should see man coverage. Aside from a short touchdown reception, Ross was quiet in week 1. If the Bengals are to win this, they will need some big plays from Ross. He has the skill to win this matchup, all eyes will be on the speedy second year man vs. this Baltimore defense.

Geno Atkins vs. Marshall Yanda – Geno made his presence known on Sunday sacking Andrew Luck once and recording 4 tackles. He did it against their rookie first round pick.  This week he will not be as lucky. He faces one of the league’s best in Marshall Yanda. In week 1, Yando received a 87.9 Pass Block grade and allowed no pressures. It’s the league’s best versus the leagues best. Hopefully Geno can out muscle him in the trenches and put Flacco in the dirt.

Based on last Sunday’s game in Indy it appears that many think the Bengals defensive line underperformed because of their lack of sacks, to which I disagree. They may not have recorded many sacks but it was because of Andrew Luck’s elite sense of pressure. Multiple times it looked as if the Bengals would drag him down and he would step up and avoid it. He also was getting the ball away very quickly to avoid the pass rush. I don’t think Joe Flacco will be able to escape the way Luck did.

My Prediction: It will be fun to watch and to see what Bill Lazor’s offense can do in week 2 against a very good Ravens defense. The Ravens do not have big tight end threats which the Bengals tend to struggle against, like the Colts do. This will leave more pressure on the secondary than the linebackers, which is a better place to depend on for this defense. All eyes will be on the defensive line to see if they can turn there pressures into sacks on Joe Flacco. I am excited for the first home game of the year. With the confidence of a week 1 victory, the Bengals have the talent to show this Ravens team what they are made of. The last time Dalton faced the Ravens he threw for three touchdowns and knocked them out of the playoffs. The Bengals are 7-2 in their last nine meetings with Baltimore. With confidence, and a new found run game, the Bengals win this one 27-24.

My Bengals Predictions on the year: 1-0

Be sure to follow me on twitter @Pierson242FF, and if you are at the game, be sure to tweet at me as I will also be in attendance on Thursday. Who Dey!

Check out the preview of tomorrows upcoming game between the Bengals and Ravens from Bengals.com editor Geoff Hobson by clicking here.