You are here: Home / Archives for Playoffs

This question could be answered simply with “win football games,” and that’s true; the Bengals will have to turn this next stretch of games into wins, but what is the process in doing that? How can the Cincinnati Bengals put themselves in the best position possible as a team to make a playoff run in one of the tightest and most challenging divisions in football.

The Bengals have one of the toughest schedules coming up through the second half of the season, but that is no excuse because the Steelers, Ravens, and Browns have extremely tough schedules as well. Luckily, the Bengals are already 2-1 within the division, which gives them an upper hand in tiebreakers. But with division games still to play against all three teams, it only goes a long way if they can pull out wins again against these opponents.

This past week, the Bengals defeated the Las Vegas Raiders to improve to 6-4 in a very critical conference matchup. The Raiders, a lot like the Bengals, have been a very inconsistent team this year. Some weeks they look as if they can hang with and beat anybody in the NFL, and other weeks, they look like an average team who isn’t ready to compete yet. Both teams were on two-game skids, which means the motivation from each side was high. Down the course of the year, the Bengals winning this game could play a profound role in how the wild card and playoff race shake out if records remain as close as they are right now.

The Bengals stretch of games to end the season now include

Every team on the Bengals upcoming schedule currently has a .500 or better record and still presents a lot of talent on both sides of the ball.

The Bengals need to get back to some of what they were doing through the first seven weeks. Forget about Week 8 and Week 9. Instead, do the little things, play for one another, wrap up and tackle, make intelligent decisions, stay disciplined, and most importantly, stay level-headed. No win is more significant than the next one.

As a young football team, that will be the biggest key for the team to remember. A big win against a good team or a win against a lousy team results in the same outcome. It puts a W in the win column and helps the team get closer to reaching their goals. And as we’ve seen countless times this year, any team can be beaten on any given day or night regardless of record.

The Bengals have seen it first hand losing to the lowly Jets. The Titans, Bills, Ravens, and other teams have also experienced it. Cincinnati will need to show up each week and put on a stellar performance and find ways to win games even when adversity puts its back up against the wall. Good teams find ways to win. If the Bengals want to be considered a top team in the AFC, they will need to beat other top teams in the AFC.

Currently standing at 6-4 overall and 2nd in the AFC North, the Bengals will be in critical battles with the rest of the division and the rest of the conference through the final eight games. Bengals currently are only one game back to the Baltimore Ravens for 1st in the AFC North. The Ravens still have to play the Browns and the Steelers twice, leaving them with a critical division matchup this week and more in the future as well.

If the Bengals can find a way to get themselves into the postseason, it would be the first time since 2015. The Bengals have not won a playoff game since 1990. Over 30 years. This team has a chance to end that streak but first will have to play the best football of their season to have the opportunity.

After a 4-1 start to the season, the Bengals found themselves in first place in the AFC North. Now a few short weeks later, they sit at 5-4 in second place behind the Pittsburgh Steelers. The Bengals can still make the playoffs, in fact if the season ended today they would be the number six seed. But the Bengals are trending in the wrong direction, and many people are beginning to write them off. Here is how and why the Bengals will still make the playoffs in 2018.

Their major problem right now is the defense. They are ranked 30th in total yards allowed and 31st in points allowed. This makes it very hard for a team to win even with their offense ranked 11th in total points scored, averaging 26.1 points per game. The defense as a whole has to improve, but how? For starters, they fired defensive coordinator Teryl Austin following last Sunday’s embarrassing loss to the New Orleans Saints. Austin’s defense got off to an okay start through the first few weeks, coming up big with turnovers that led to multiple wins. The defense took a turn against the Steelers and seemingly never got back on track. On the final defensive drive of the game, the Bengals defense allowed the Steelers to march down to field goal range after letting them convert on a long third down and a costly defensive holding penalty by Dre Kirkpatrick. As if that wasn’t bad enough, Austin called an all out blitz a few plays later where Ben Roethlisberger connected with Antonio Brown to give the Steelers the win. After the game, Vontaze Burfict was on tape asking why they called a play they had never even practiced.

Vontaze Burfict walks off saying the #Bengals called something they never call. Not even in practice. @fox19 #Bengals pic.twitter.com/zGHxAhJSJz

From here things continued to get worse for the defense, with multiple players beginning to question Teryl Austin’s methods. This continued to snowball, the Bengals would go on to give up 500+ yards on defense in three straight games, an NFL record. This led to the Bengals making an usual move, and firing a coach midseason. This now puts Marvin Lewis in total control of the defense, a move that could ignite a late season spark that this defense desperately needs. Lewis was known as a defensive guru before taking the head coaching job in Cincinnati. Lewis is the man behind some of the best defenses in the Super Bowl era. It is now all eyes on Lewis who appears to already be working first hand with the defense on the basics of football. A good sign for Bengals fans.

Who's Marvin Lewis the defensive coordinator? Much more hands on at practice. Going over basics with his defense. #Bengals @fox19 pic.twitter.com/4J4XFkyqtl

Hue Jackson! I know that Bengals fans have very mixed feelings on bringing Hue back in the fold, and if the end goal is to eventually promote him to head coach I dislike the move. However, bringing in someone the Bengals players all trust and someone who had great success in Cincinnati, its not a terrible idea. Marvin will get to focus on the defense and have someone he trusts on the sidelines on game day in case he needs to spend more time with the defense. It is almost as if they want him to serve more like the coach and Marvin as the defensive coordinator without the official titles. It will be interesting to see how this hire plays out and the effects that it will have but the bottom line is that Hue had great success in Cincinnati, why not try to find that spark this team needs. 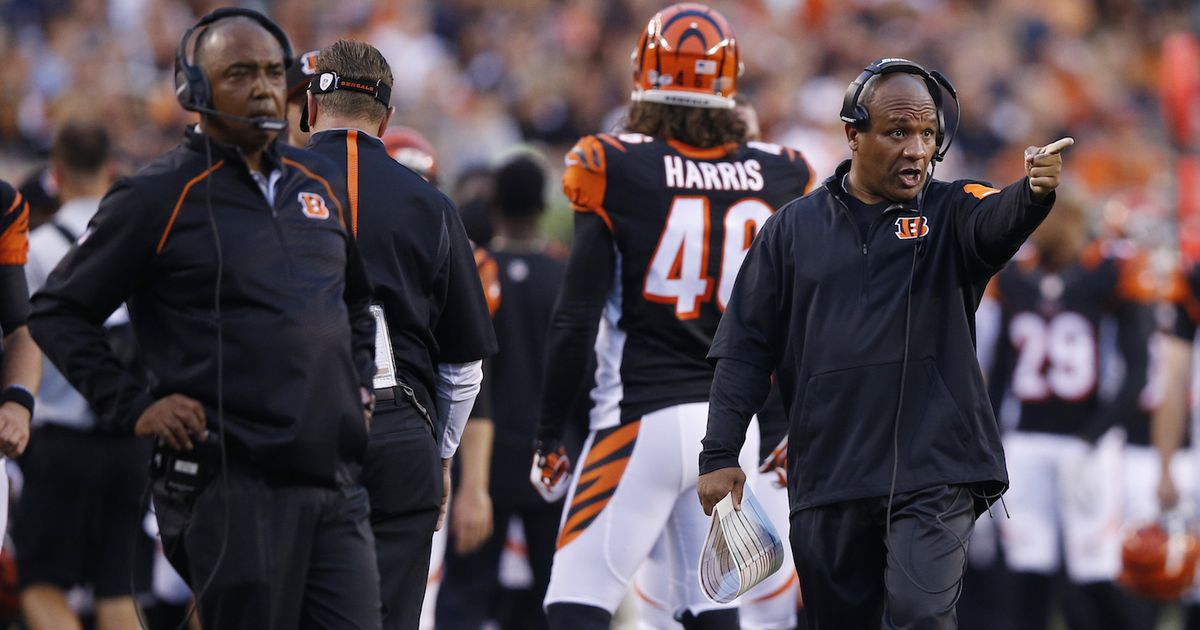 The biggest reason the Bengals could still make the playoffs is their schedule. Right now it looks like the Chiefs, Patriots, Chargers, Steelers, and Texans are all sitting in pretty good for spots 1-5 in the AFC playoff picture. Which means there is one wild card spot up for grabs. In my opinion there are four teams including the Bengals that will be fighting for the last wild card spot. Those teams are the Bengals, the Ravens, the Titans, and the Colts. The Bengals and Colts both have much easier schedules remaining compared to the Titans and Ravens. The Ravens still have games against the Chiefs, Falcons, and Chargers. The Titans will still face the Redskins, Jaguars, Texans, and a red hot Colts team twice. Indianapolis has a chance to go 5-2 to close out the year which would leave them with a 9-7 record. Their two toughest games will be at the Texans, who they almost beat earlier in the year, and at the Jaguars, who they beat last week. Then we have the Bengals, who could also finish the year 5-2 to end up at 10-6 on the year.

Week 11: @ Ravens – A winnable game for Cincinnati. They have a history of doing very well against the Ravens, and it is a Ravens team that could see either a rookie or Robert Griffin III starting at quarterback. Baltimore has a tough defense but I think Cincinnati wins this game.

Week 13: Broncos – The Broncos have a tough defense but a weak quarterback to lead their offense. As long as the Bengals keep Von Miller off of Andy Dalton this is another game the Bengals should win.

Week 14: @ Chargers – A possible three game win streak will see its end in LA. The Chargers are red hot right now with only two losses. I think the Bengals will fly home with a loss.

Week 15: Raiders – The Raiders look like the favorites to finish the season with the first overall pick in next years draft and are clearly building for the future. The Bengals get back in the win column.

Week 16: @ Browns – Winning on the road in Cleveland will be tougher than in Cincinnati but the Bengals still have experience on their side. The Bengals should sneak out with a close win.

Week 17: @ Steelers – The Bengals aren’t beating the Steelers on the road. They can’t even beat them at home. The Bengals end the year with a loss.

This would put the Bengals at 10-6 and in a prime spot to sneak into the playoffs. Based off of my projections I have the four teams projected to finish as so…

As I mentioned the Ravens have a tough second half schedule and I think their final record will suffer for it. The Bengals can’t afford anything less than a 10 win season with how close this wild card race could be. With Cincinnati’s remaining schedule, a 10-6 finish is still on the table.

No one is saying it will be easy, but the sky is not quite falling just yet for this team. With a good blend of veterans and youth, and a fresh coaching change, the Bengals still have the talent to be a playoff team. I would love to hear your thoughts on the Bengals playoff outlook. Be sure to follow me on twitter @Pierson242FF. Who dey!